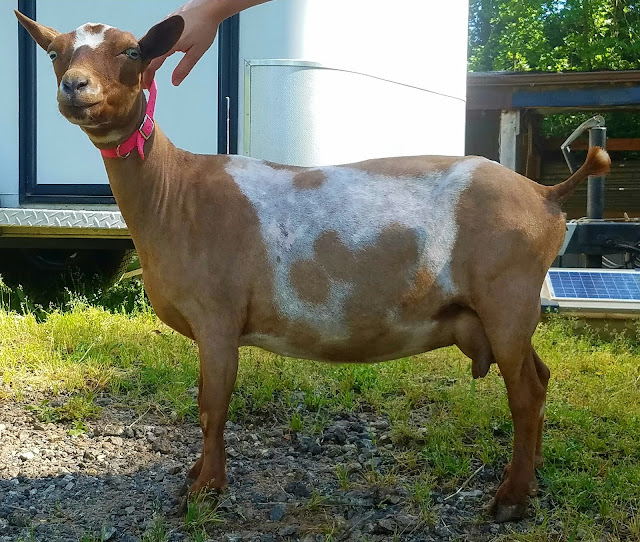 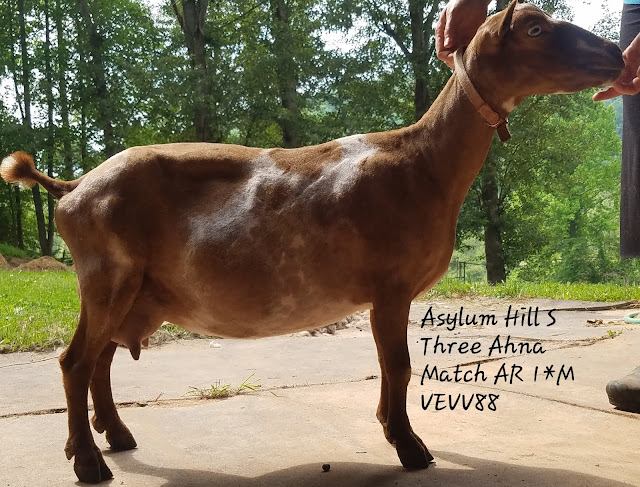 Ahna, a flashy red and white doe with blue eyes, was our first foundation doe. She was a doe I was boarding simply for the extra milk. But it did not take long to fall in love with her and decide to keep her as our foundation doe!
Aside from her amazing disposition, she has a milker's-dream udder. She milks out fast and flat with a well-attached udder, has perfectly-sized teats for my hands, and earned her milk star on the first year she was tested (as a second freshener). She also kids very easily, never having any complications nor needing assistance, even though her first freshening she produced a huge buckling.

Her pedigree is not one I would have sought to be the beginning of our herd because I simply didn't know enough about genetics at the time when we began, however she has definitely earned her place within this herd. So despite the fact that, knowing what I now know, I would have gone with a doe with a very different pedigree, I am elated to have this doe and am grateful that she is with us.
Kidding history:
1F- single buckling
2F- buck/doe twins
3F- buck/doe twins
4F- triplets, two bucks and one doe
5F- triplets, one buck and two does
6F- triplets, one buck and two does 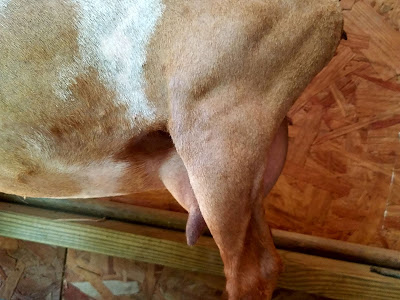 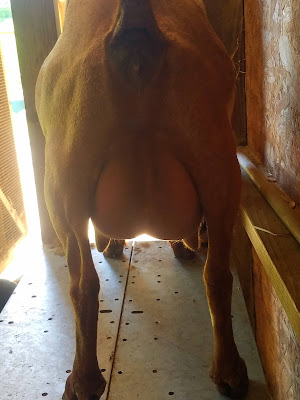 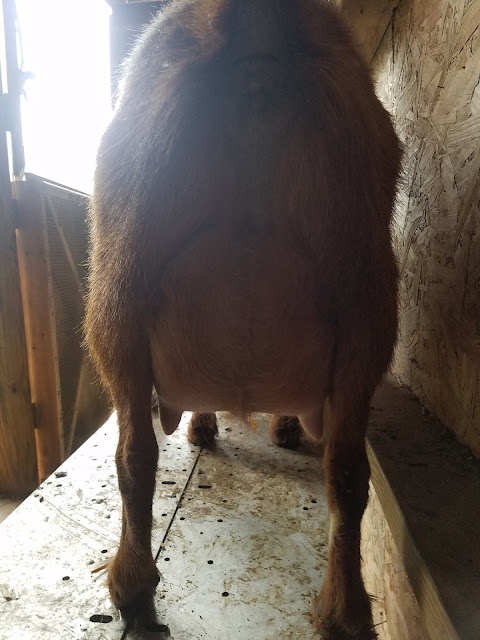 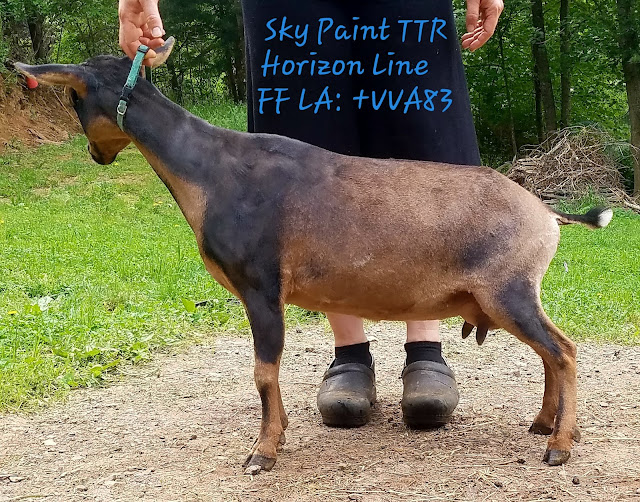 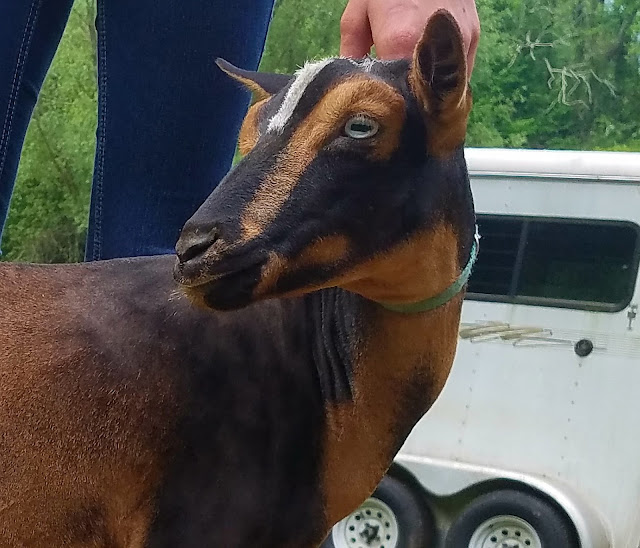 Horizon is my daughter's 4H doe, and has proven to be an excellent choice. She is a very dairy 2016 junior with a nice topline and head and overall body shape. She is a petite buckskin with blue eyes
Horizon has made the junior grand champion lineup once.
Horizon's first freshening udder lacks capacity, however I won't judge her udder yet since she freshened with a small, single doe kid. Her udder texture is just as amazing as her dam's, and her teats are large and very easy to milk. I am very pleased with how she has freshened overall.
Horizon kidded with ease and without assistance. I am very proud of this little doe!
For her 2018 linear appraisal session, the only category that she scored low was in mammary, because of how small her udder is. However, the appraiser said it is a high "A" in mammary, because it is very well put together and very well attached. At this point, despite low production as a first freshener, I would say she has the nicest udder of our entire herd. Her teats are large placed exactly where they should be, she has a strong medial, she has excellent attachments, and her udder texture is just how I like it. We are praying for more production for her second freshening!
Kidding History:
FF- single doe
2F- buck/doe twins 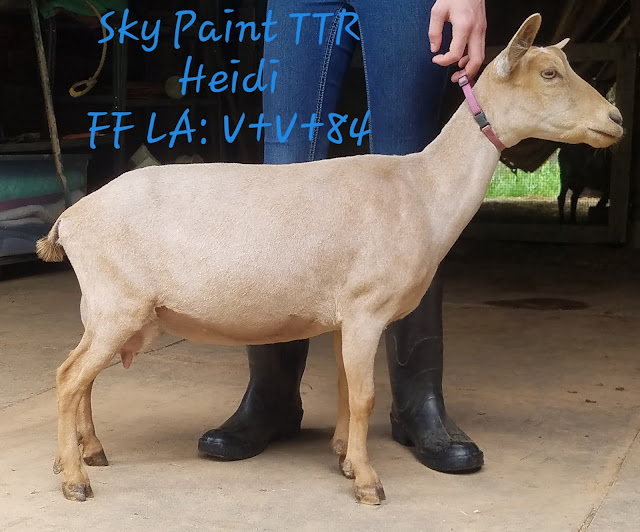 Heidi is a beautiful 2016 doe. She has made the junior grand champion lineup once, and the reserve junior grand champion lineup three times. She has a very nice, wide rump that is nearly level from hips to pins and thurl to thurl. As one judge commented, she's just a Plain Jane little brown doe, but she has a lot to offer in the show ring and should prove to be a productive doe.
Heidi's first freshening udder is beautiful! She produces as much as my second freshener, and her udder is high and tight to her body. She milks easily and is an amazing mother, kidding all by herself with twins.
Kidding History:
FF- buck/doe twins
2F- twin bucks 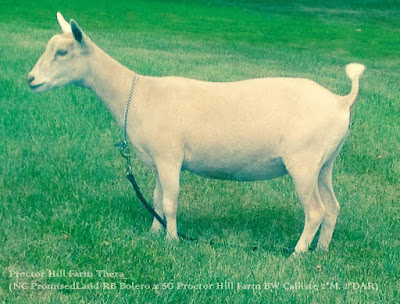 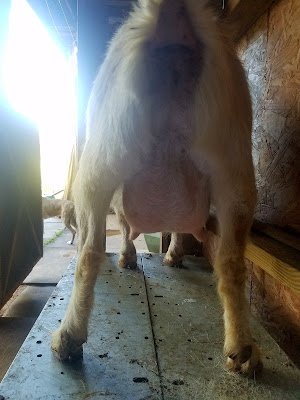 Thera has a pedigree that makes me drool! Lots of milk and lovely udders behind her. She kidded quickly and easily with twin does, however one was DOA, so since she only was nursing a single as a FF I did not expect much of her udder. However, her udder is well attached and her teats are very easy to milk.

I expect her to appraise well in 2018 as a more mature second freshener, especially since she did not have a 12 hour fill for her LA session in 2017 (She has a very persistent doeling!!). She has a buttery-soft, easy-to-milk udder that empties out completely. 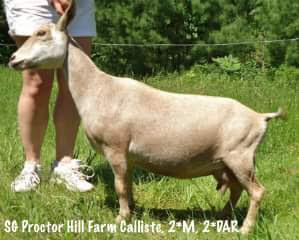 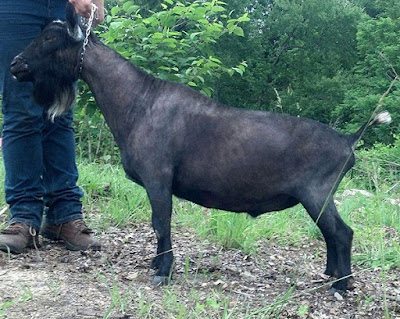